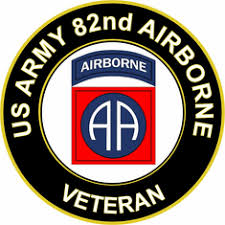 Born March 4, 1927 in Francis, Oklahoma, he was the son of the late Sydney and Leva Snode. Also preceding him in death were his sister and brother, Norma Oien and Roy Lynn Hollis.

CSM Hollis proudly served this great nation in the Army for over 25 years, from 1945 until retiring in 1971. Early in his career, the CSM earned his jump wings and served with the Army’s 82nd Airborne Division. Additionally, he was an original member of the Army’s elite Golden Knights Parachute Team. His foreign service included tours of duty in Japan, Korea, the Dominican Republic and Vietnam. Along the way, the CSM earned three Bronze Star Medals, the Air Medal and two Army Commendation Medals.

A family man, John loved working in his yard and was a jack of all trades. He enjoyed bowling and listening to country music. He also enjoyed his service with the 82nd Airborne Division Association serving in various positions. John will always be remembered for his mild disposition and striking blue eyes.

John’s family will be forever grateful to his caregivers, Mozella and Sandy, for the loving kindness and tender care they provided to him.

On Wednesday February 5, 2020, a visitation will be held at Campground United Methodist Church at 11:00am. A Celebration of Life Service will follow at 12:00pm with the Reverend Sang Park officiating. At 2:00pm, a burial service with full military honors will be held at Sandhills State Veterans Cemetery.

To send flowers to the family or plant a tree in memory of Ret. CSM John T. Hollis, Jr., please visit our floral store.