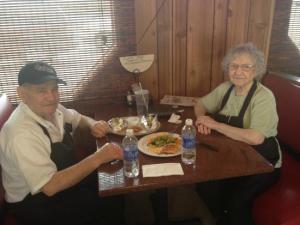 Christos Elias Zachariadis, 96, passed away on Monday, November 16, 2020. He was born in Kalos Agros, Drama in Greece in 1924 to the late Elias Kostas and Ploumia (Stamatiadis) Zachariadis.

At an early age (12) Christos became an apprentice to a local tailor, eventually opening his own shop until he joined the Greek Army, where he fought in the Greek Civil War. After the military in the early 1960’s, Christos moved his family to Hanover, Germany to work for the Continental Tire Co.

In 1966 he moved to the US with his family and settled in the Waterbury, Connecticut area beginning a career as a restaurateur. He owned several restaurants including the Charcoal Kitchen, Acropolis Pizza, Morris Pizza Castle, and then worked as a chef for the original Zachary’s Pizza. In 1991 Christos moved his family to North Carolina and opened Zachary’s Pizza in St. Pauls with his three sons.

The family will welcome friends from 6 to 8 PM on Friday, November 20, 2020 at Rogers & Breece Funeral Home, with the Trisagion at 6:30 PM. A funeral service will be held at 1 PM on Saturday, November 21, at St. Constantine and Helen Greek Orthodox Church with Father Alexander officiating. Burial will follow the service at Fayetteville Memorial Cemetery.

To send flowers to the family or plant a tree in memory of Christos Elias Zachariadis, please visit our floral store.