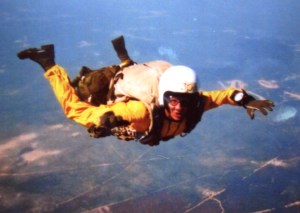 Chris was born January 9, 1962, in Cedar Rapids, Iowa. The oldest, and wildest, child of Donna (Griswold) and Tom Kluck. It was obvious from an early age that he would always love a good challenge, and would often be one.

Chris was also a true fighter and he won most of his fights (except that one in college that resulted in a blown out eye socket).  He had better luck during his 23 years in the US Army; 17 of which were spent in the Special Operations community.  As a Green Beret, or as he liked to call himself, "a steely-eyed barrel-chested freedom fighter", he operated mostly throughout Central and South America. Chris was qualified as an Airborne Jumpmaster, Military Free Fall (MFF), Special Operations Sniper (SOTIC), Special Forces Advanced Urban Combat (SFAUC), and Survival Evasion Resistance and Escape (SERE-C), among others. He earned too many awards for us to name (or remember), so suffice it to say, he was an all around badass.

In addition to his military career, Chris worked in the US Counter Narcotics program, as a High Threat Protection/Third Country National (TCN) Instructor for Blackwater, and as a Senior Lead Instructor and Training Manager for O'Gara Training and Services. After leaving all that risky business behind, he owned and operated VonTucks Bar in Oelwein, Iowa.

Spending nine months a year away from home can take it it's toll on your personal life, as Chris found. As they say, the third time is the charm, and that is the number of times it took for Chris to find his perfect wife, Angela Macias Kluck. She was the wife he never deserved and her loyalty was unmatched. Chris made sure to stick around long enough to celebrate their 11th wedding anniversary on October 25th.

Chris was very proud of his children, Stephanie Harrington of Raleigh and Tyler Harrington of Wilmington. He was thrilled to officiate Tyler's wedding to Jocelyn Henry one year ago, and spent weeks insisting everyone call him Reverend.  The only thing he enjoyed more than having Steph, Ty, and Joc come for a visit and taking them out on a boat ride, was playing pranks on them. By the way, if you are looking for a boat, you should wait the appropriate amount of time and get in touch with the family. Tomorrow would be fine.

Chris had several claims to fame: he and Angie were extras in several movies and TV shows (his favorite being his death scene in Sleepy Hollow); he made it to the Showcase Showdown on the Price is Right; he claimed he invented the "Guess what? Chicken butt!" joke (FYI, he didn't); and he wrote several books and screen plays (all unpublished).  His writing is actually quite good (hint hint if you are in the publishing business).

He was wicked smart and didn't suffer fools. He would often say, "People are stupid and they disappoint me everyday." He never met an argument he didn't like and was never wrong; if you asked him he would have told you so. Chris was certainly a character, and while we won't tell you he lit up every room he walked into, he did light up many faces with laughter.  Although he had a crusty exterior, he had a soft heart, especially when it came to kids. Probably because he loved to teach the younger generation "his" chicken butt joke.

When he lost his leg to cancer in 2008, he joked that he was going to open an IHOP. He battled cancer for 11 years and beat it for much longer than expected. We are grateful that his fight is over and that God is now his Commanding Officer.

In addition to his wife and children, survivors include his two younger sisters (aka the first victims of his pranks), Lisa (James) Cashman of Cedar Rapids, Iowa, and Michelle (Nancy) Roberts of Burlingame, California; niece, Katie (Jake) Fish; nephew, Luciano Vitale; great nephew, Jaxson Fish; fur baby, Feebee; and many in-laws, extended family, and friends. He was their protector and faithful supporter. If you were in his circle, he would do anything to help you.

Waiting for him on the other side were his parents, Tom and Donna Kluck; his niece, Susanna Roberts; and his four legged best friends, Baxter and Tucker.

The family would like to extend its sincere appreciation to Dr. Riedell at the Duke Cancer Center and Lower Cape Fear Hospice for their amazing care of Chris.

Services at 1:00 PM on Monday at the Rogers and Breece Funeral Home in Fayetteville. Entombment with full military honors to follow at the Cumberland Memorial Gardens. Friends may call at the funeral home beginning at 11:30 AM on Monday.

In lieu of flowers, memorials may be directed to the Children's Cancer Center at Duke Hospital or Lower Cape Fear Hospice.

In remembrance of Chris, please go on a boat ride, tell a dad joke, help someone who needs it, or just be an all around badass.

To send flowers to the family or plant a tree in memory of Ret. MSG. Christopher David Kluck, please visit our floral store.

You can still show your support by sending flowers directly to the family, or by planting a memorial tree in the memory of Ret. MSG. Christopher David Kluck
SHARE OBITUARY
© 2022 Rogers & Breece Funeral Service. All Rights Reserved. Funeral Home website by CFS & TA | Terms of Use | Privacy Policy | Accessibility