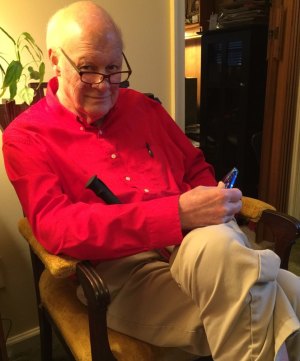 He is survived by his beautiful and loving wife of 50 years, Irene of Fayetteville, NC and his only daughter, Jennifer (David) of Wilmington, NC and one grandson, the apple of his eye, Coleman Parker of Boone, NC and an adopted grand daughter, Jade Walden of Wilmington, NC, John Graeber, brother-in-law, of Raleigh, NC, Kay Rogers, sister-in-law, of Sun City, SC, Dee Cox (Steve and daughter Kaycee), niece of Roanoke Rapids, NC, and Eddie Cox (Janet), nephew, of Roanoke Rapids, NC, and many other lifelong and devoted friends. He is preceded in death by both his father and mother and his only brother, Vernon Seymour Buffaloe.

Ford was a 30 year retired Health, Physical Education teacher, and Coach in Cumberland County Schools. He was very affectionately referred to as “Coach Buff”. He was a true inspiration and mentor to many, many students.  Coach Buffaloe taught all of his players and students about life and the importance of being a good person, about having drive and grit, getting a good education, and working hard to achieve your goals.   His legacy lives on in the thousands of kids he coached and taught, who grew up to be contributors in every sector of society today.

He was an example of what a Christian man should be was second to none. He was a lifelong member and servant to the Lord and not only attended Haymount United Methodist Church but served unselfishly for more than 30 years.  He was Chief Usher welcoming anyone that walked through the door, chair of Pastor Parish Relations leading the church in matters that dealt with personnel, and chair of trustees to ensure financial issues were addressed properly. He served on these committees as well as many more and most in the community recall him selling Hubert Willis Memorial Scholarship BBQ tickets for Methodist men. Ford felt that you should give back to the church through tithes, offerings, gifts, and service.  He did this very unselfishly.

Ford served others in his personal and family life as well. He served as President of the Board of Homeowners at Peppertree Resort Villas in Atlantic Beach, NC and also as President of the Board of Homeowners at Willow Valley Resort in Boone, NC for more than 25 years!  He spent many hours of laughing, intense debate, problem solving, and advocating for thousands of people.  He took his position seriously, and was just a good person, overall.  Ford was a presence in every room he was in.

Ford’s family would like to express their sincere appreciation for the love and respect shown to Ford the last six months of his life as he called The A. R. C. of Hope Mills, the staff and caregivers, and residents, his extended family and his home away from home!  They made his journey comfortable and more bearable until the very end!
We would also like to thank Medi-Hospice of Lumberton for his care and comfort in his final days!  We could not have finished this journey without all of you!  It takes a TEAM to make it happen and you were a winning Team as Coach would say!

The family will receive friends at Rogers Breece Funeral Home on Saturday, November 16th from 6 - 8 pm. The memorial service/celebration of life will be on Sunday, November 17th at Haymount United Methodist Church at 3 pm.

In lieu of flowers the family requests donations be made to one of the following 3 options:
Haymount United Methodist Church
Alzheimer’s Association
Medi-Hospice of Lumberton

To send flowers to the family or plant a tree in memory of Ford Monroe Buffaloe, Jr., please visit our floral store.